The world has watched the retail demand for silver spike over the past 2 weeks. But now the tightness has spread into the 1,000 ounce wholesale bar market.

ZeroHedge reported last week how the US Mint has been unable to keep up with the surge in silver demand.

“The US Mint is limiting distribution of its gold, silver and platinum coins to specific dealers because of heavy demand, and a limited number of suppliers of metals, it said in a statement.”

Kitco also commented on the “rationing” of certain coins by the Mint.

The U.S. Mint has been rationing the sales of its silver coins due to “continued exceptional market demand” and limited supply, Bloomberg quoted the U.S. Mint as saying on Tuesday.

Yet now the dislocations in the market have spread to the 1,000-ounce wholesale bar level. With multiple dealers reporting increased premiums and delays.

When 4 large silver dealers were asked point-blank Wednesday morning if they could fill an order for a customer who wanted to buy $10 million worth of silver and take delivery by the end of the week, not one was able to say they could do it.

Instead, they’re being told by their wholesalers that it would take at least a month, if not longer.

Given the increasing attention being placed on the big silver short position that’s now out in the open for any fund in the world to study, it’s becoming more and more difficult to see how the tightness gets resolved at the current price level.

Especially with so many new eyes on the story, perhaps it’s also worth reconsidering if the silver squeeze is really over yet. 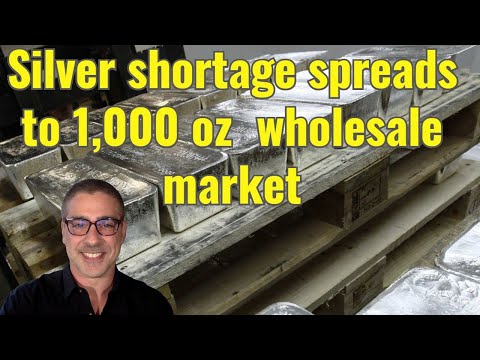